Totally missed St. Patrick's day in blog land, hu? This is as festive as I got this year, food-wise: 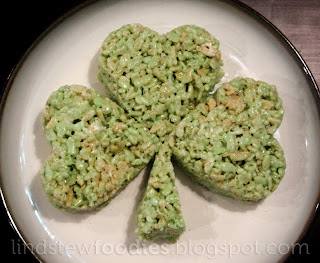 [ heart cookie cutter + green rice krispies treats = easy st. patty's day treat ]
Last St. Patrick's Day was a total FAIL. I thought, "I'm going to make an Irish meal instead of green food this year." I bought some corned beef and cabbage and got to work. Turns out I can't make corned beef (I cut almost all the fat off it because it totally grossed me out, which made for a very rubbery brick of beef, plus I tried an apricot glaze that probably would have been pretty good if I wouldn't have rinsed almost all the salt off the corned beef). The Irish soda bread I made was ok, although SUPER dense and way too grainy. The best part of the meal was probably the cabbage, which was alright, except I cooked the whole head of cabbage and we had TONS. I think I'll stick to green food from now on, we're Scottish, anyway (although I haven't tried making haggis yet, and don't know if I ever will).

Here's an amazing pasta dish for you instead, how's that? There's green in it...we actually ate the leftovers for dinner on St. Patrick's day. 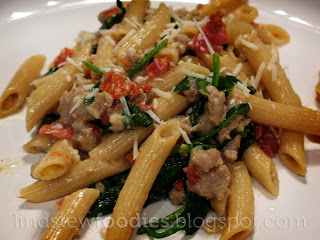 I had some sweet Italian turkey sausage, so I searched for a recipe that called for it. This recipe looked so delicious, and I'd never used sun-dried tomatoes in my cooking before, so I decided to try it (plus it used spinach, which I had an abundance of). This is probably one of our favorite skillet pasta meals now! Relatively healthy (if you use healthy pasta, sausage, and cut the cream), slightly spicy, and rich taste without fat!

Directions:
Bring large pot of water to a boil for pasta, and add pasta.
Meanwhile, place sausage in a large non-stick skillet over medium-high heat. Cook, crumbling sausage, until slightly pink inside. Add onion and cook until softened, about five minutes. Stir in the garlic and cook until fragrant, about 15 seconds. Stir in tomatoes, cayenne pepper, broth, and fat free half and half. Bring mixture to a boil. Reduce heat to low, add the pasta, and stir. Stir in spinach one handful at a time and cook until wilted, about two minutes. Season with salt and pepper to taste. Top individual servings with Parmesan.