Have you ever eaten anything so yummy-in-your-tummy that it makes you say, "Mmmmm" every bite and jump up and down in your seat and wave your arms like an excited three-year-old?
No?
Yeah....me neither (I might be lying).
This was so good that I may have eaten every last bit from my bowl and licked the bowl after (while Stew was out of the room...and just one lick!). It may have been so good that I saw the tiny amount of sauce leftover and dumped the little leftover rice I had in the pan just to soak up the sauce...and Stew may or may not have totally caught me in the act of eating the saucy rice straight out of the pan. It was even good enough for me to say, “I could eat something like this every day,” as I was cleaning up.
If only there were leftovers. :(

So getting closer to the point...I don't think this should be called Bourbon Chicken...there's no bourbon in it...but I don't know what else to call it, so we're calling it Bourbon Chicken, alright? What is bourbon chicken you ask? "Bourbon Chicken is a flavorful dish named after Bourbon Street in New Orleans, Louisiana, and for the Bourbon whiskey ingredient. The dish is commonly found at Cajun, Chinese, and American BBQ themed restaurants" (thank you, wikipedia). I didn't know Cajun, Chinese, and American BBQ restaurants could serve the same dish!?
But don't let all that throw you off—I'm glad I didn't. I thought this dish tasted like a delicious rice bowl at Rumbi, and I love me a good rice bowl! 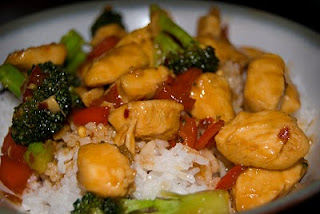 The sauce, oh the sauce, was so amazing. I've never been able to make an Asian sauce like this before. It was the perfect blend of sweet, salt, and spice (just a little kick, not punch-you-in-the-face with heat). The original recipe didn't call for veggies, but I added them because I LOVE veggies in my rice bowls (especially the broccoli, because the "leaves" hang on to the sauce)! I guess the veggies make mine less Bourbon-y and more Asian. ;)

Directions:
Heat oil in a large skillet. Add chicken and cook until lightly browned. Steam veggies in the microwave until a little underdone. Remove chicken from skillet. Add remaining ingredients (minus the veggies and cornstarch slurry), heating over medium heat until well mixed and dissolved. Add the chicken and veggies and bring to a hard boil. Reduce heat and simmer for 10–20 minutes. If you prefer a thicker sauce, add a slurry of cornstarch and water (premixed separately) to reach desired consistency. Serve over hot white or brown rice.

*I have to admit that I didn't follow the directions exactly. I cooked my chicken all the way through before removing it from the skillet. I also don't think I cooked my sauce long enough (we were hungry!), it probably could have been thicker...but it was STILL fantastic, so I think it's hard to mess up!

If you like Rumbi's rice bowls (or Cajun, Chinese, or American BBQ—haha), you'll love this!

*Special note to Lindsey's dad: You will absolutely LOVE this! I PROMISE! :)


**Update on 5-2-10: The photos on this post probably aren't exactly what your sauce will look like. I was in a hurry the first time I made it and didn't let the sauce simmer and thicken long enough. It will probably look more like this: 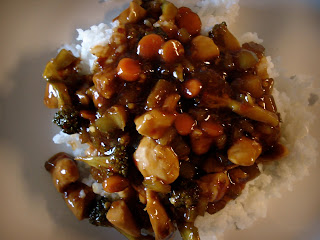 Rebecca said…
You are right, your dad LOVED it!! It was super tasty! It is everything you could ever want in a rice bowl! We should have added more veggies. (water chestnuts, zucchini, or carrots maybe). Thanks for the recipe!
March 16, 2010 at 7:24 PM

AdrianneJayne said…
Finally got around to trying this! It was much easier than I'd anticipated! I added broccoli, red pepper, green pepper, onion, and corn. It was deliiiiish! Definitely going to incorporate this into our dinner rut!
April 26, 2010 at 9:55 PM