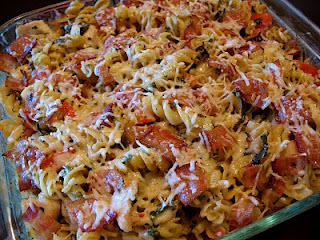 Also known as "Chicken Bacon Spinach Dip Pasta with Tomatoes." We were trying to come up with a name for the dish (since it was my concoction) during dinner. Stew gave me a high five after finishing two big portions and said it should be called "High Five Noodles." After some deliberation, I finally gave in because I love him so much (and it's a catchy name)!

I had leftover spinach dip and thought it would be good in pasta, because it would be kind of like hot spinach artichoke dip or pasta. I scoured the internet for "spinach dip pasta" and found a recipe to start from (here). It turned out so delicious and I'm glad I have a way to use up leftover spinach dip! I can feel a ranch dip pasta in the works too. :) This pasta is good enough that I'd make (or buy) spinach dip just for this if I didn't have leftovers! The Worcestershire give some oomph and is a must, and don't leave out the tomatoes or bacon; the tomatoes add some nice tang and the bacon some great texture and salt. 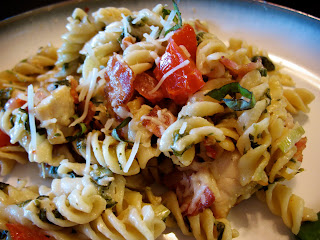 Here's the recipe for four servings, or a 9x9" pan

Ingredients:
Penne or rigatoni pasta, half of a 14.5 oz box
6 chicken tenders
1 1/2 cups of spinach dip (honestly, I didn't measure, but I think it was about that much)
1/4 cup Worcestershire sauce
1/2 cup Parmesan cheese, divided (or more if you desire)
Garlic salt, a few shakes
1 tsp dried basil
4 slices of bacon, chopped (I used Oscar Meyer fully-cooked bacon, it has less fat, but is still real bacon)
2 tomatoes, diced and seeds taken out

Directions:
Cook pasta according to package directions, erring on the side of al dente.
While pasta is cooking, cook the chicken in a skillet with a sprinkling of garlic salt. Once cooked through, remove from pan and cut into bite-sized pieces. Combine spinach dip, Worcestershire sauce, 1/4 cup Parmesan cheese, garlic salt and basil in a bowl and stir to combine. Cook bacon (unless you're using fully-cooked bacon).
In a 9x9" pan, combine cooked pasta, chicken and spinach dip mixture and stir to evenly distribute the dip. Add tomatoes and stir gently to incorporate.
Top with crumbled bacon (can be made up to this point and refrigerated if cooking later, that's what I did).
Cover with foil and bake at 325º for 30–40 minutes, or 350º for 20–30 minutes. Remove foil and sprinkle 1/4 cup Parmesan cheese on top and bake for 5–10 more minutes.
Serve topped with more cheese, if desired.