In October, I went to my friend, Holly's house for a girls' night. We each brought a recipe to share and Holly made pumpkin cookies and this amazing butternut squash soup. She got the recipe from another good friend, Maggie (here's the link to the original recipe). 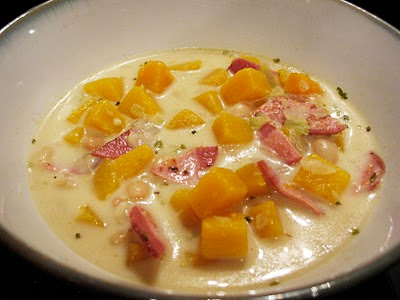 [Sorry, this picture really does not do the soup justice!]
I was a little afraid to eat it, since I was still in my first trimester and only eating really bland foods, but once I did, I was glad I didn't pass it up! It is the perfect fall/winter soup. There is a hint of cinnamon and cloves, which enhances the sweet butternut squash. The beans add a great texture, and the bacon is the salt (don't leave this out!). The soup was spicier than I expected—a pleasant surprise—but could easily be taken down a notch by reducing the cayenne pepper. It goes perfectly with a nice salty breadstick or roll!

Directions:
Cook bacon over medium heat until crisp. Remove bacon from pan, reserving about 2 teaspoons of bacon drippings (or if you're using turkey bacon, just add olive oil to the pan). Crumble the bacon and set aside. In a large pot, add onion, celery and garlic to bacon drippings. Cook about 3 minutes until tender. Add squash; cook 3 more minutes, stirring occasionally. Add 1/4 cup chicken broth and stir until the liquid almost evaporates. Stir in the remaining broth, cumin, red pepper, cinnamon and cloves (and oregano if using dried). Bring to a boil. reduce heat and simmer 5 minutes or until squash is tender. Stir in cream, oregano, salt, pepper and beans. Bring to a boil. Remove from heat. Sprinkle each serving with bacon and pumpkinseeds (if desired). Makes about 6 portions (1 1/2 cups each).

*Another yummy way to take down the heat a little is adding sour cream to the bowl.
Labels: Dinner Recipes Lunch Recipes Main Dish Soup Recipes