For a last "hurrah" before our foodie baby comes, Stew had the idea to do a little "babymoon." He had the whole day planned, from the time we woke up to the time we went to bed. One thing we did was make lunch, "lindstewfoodies style." We'd been watching the show "America's Next Great Restaurant" (talk about a show made just for me—food + design?!), and one of the contestants on the show had the idea for a grilled cheese restaurant (we both wanted him to win, but sadly he didn't).
Stew, being the creative guy he is, decided this would be a fun lunch (especially because I've upped my grilled cheese intake since being pregnant). He found a picture (recipe NOT included, from Martha Stewart here), secretly bought all the ingredients, from the Dijon mustard to the sourdough bread (thank you Kneaders!). I was very impressed.

It was such a flavorful sandwich!! 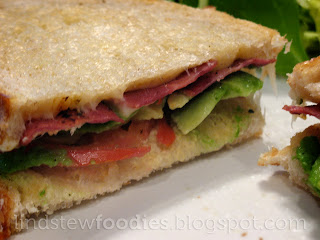 We couldn't quite "grill" our sandwiches, because of the type of bread we used, so we just broiled them in the oven, and they were still great! However, I think to be a "grilled cheese" we should have used double the cheese...our sandwiches were more like a grown-up BLT...but still fantastic! Even though neither of us love Dijon mustard, we both thought the tang added a lot on this sandwich!
Next time you need a change from the regular grilled cheese, make this! You won't be disappointed!

Directions:
Cook bacon in a skillet. Set aside. 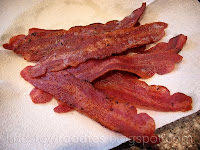 Turn on broiler (500º F), panini press, or skillet for grilling. Spread Dijon on one slice of bread. Layer tomato and avocado slices on top.

Sprinkle black pepper on top of avocado. Place bacon, about three slices per sandwich (depending on bread size), on top of avocado. Top generously with cheese slices.
If broiling, place in broiler, along with bare bread slices for tops, until cheese is melted and bubbly (watch carefully). 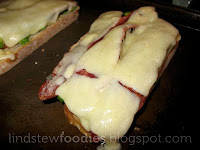 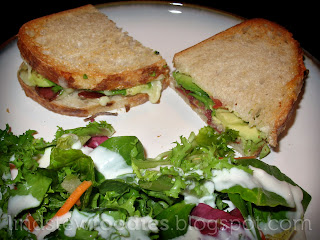 Rachelle said…
This sounds absolutely delicious! I love the idea of it! Have you ever tried apples on a grilled cheese sandwich? Try making a regular grilled cheese sandwich with sharp cheddar cheese. While it's cooking, slice a granny smith apple into thin slices. Once it's done, quickly open it up, put in the apple slices, and then close it again. Delicious!
June 15, 2011 at 6:55 PM