If you don't already know, I go on a major pumpkin kick the last three months of the year. When I saw these pumpkin waffles from You're Gonna Bake It After All, I knew it was just a matter of time before I consumed them. 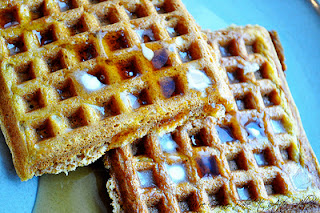 Photo from You're Gonna Bake It After All

I made a couple small changes to make them a tad healthier, and they were so delicious! Think pumpkin pie in waffle form. When the smell of pumpkin and spices had filled our house, Stew said to me, "The smell of pumpkin and spices in the kitchen at this time of year means there's someone in the kitchen who loves me!" :) He was so glad I convinced him to have these waffles for dinner. Make them soon!

Pumpkin Waffles
Adapted from this recipe

*Or use 2 cups milk with 2 tablespoons vinegar and allow to curdle for 10 minutes.

Directions:
Preheat oven to 250°F and preheat waffle iron.
Sift together flour, brown sugar, baking powder, baking soda, salt, and spices. Whisk egg yolks in a large bowl with buttermilk, pumpkin, and oil until smooth. Whisk in dry ingredients just until combined. In a mixing bowl with a whisk attachment, whisk the egg whites until they hold soft peaks. Fold them gently into the waffle batter until just combined.
Spray waffle iron with cooking spray. Pour or spoon batter into waffle iron, spreading quickly. Cook according to manufacturer’s instructions.
If serving many people, transfer waffles to rack in oven to keep warm and crisp.
Repeat with remaining batter.
I just cool my extra waffles on a cooling rack, break up the squares, wrap them in waxed paper, and pack them up in freezer bags. Then they are ready to pop in the toaster from frozen.
Serve topped with butter and maple syrup and enjoy the flavors of fall!
Labels: Breakfast Recipes Meatless Meals Pumpkin Recipes