How we became foodies

To understand the purpose of this blog, you must know a little about Lindsey and Stew. 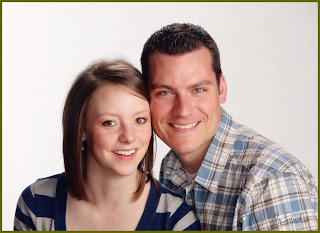 In the Summer of 2008, Lindsey called Stew and asked if she could make Sunday dinner for the two of them. Stew was really excited and thought it was a great idea. What started out as a friendly Sunday dinner turned out to be the first of many dinners made together. As the couple began dating in the fall of 2008, they realized they were a good match: Lindsey liked cooking good food and Stew liked eating good food (and helping clean up!). Lindsey is somewhat particular of what she puts in her mouth. Stew, on the other hand, was NOT as concerned about what he put in his mouth, as long as it tasted good.

For Christmas of 2008, Lindsey's mom gave her a cookbook called “The Food Nanny Rescues Dinner: Easy Family Meals for Every Day of the Week.” The recipes are from Liz Edmunds, who was Lindsey's LDS Young Women's leader. The whole philosophy behind her cookbook is that cooking good food brings families together. She also wrote the book to help young mothers and families create meaningful meals. The cookbook also has what Liz terms “conversation starters,” which help start meaningful conversations around the dinner table. She believes dinnertime bonds families and keeps “the communication between family members wide open.” So as Lindsey began using the cookbook, it sparked entire evenings of good food, great conversation, and lots of laughter and fun! 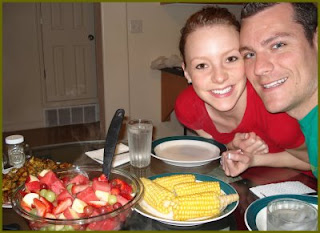 After the two were married in June of 2009, they honeymooned in Maui, Hawaii. While they were there, they decided they wanted to eat at unique restaurants. They found a nice little beach town called “Kihei.” On the main ocean-side road of Kihei, they found a bunch of little restaurants shoved in a two-block radius. Every day, the couple found themselves returning to Kihei to dine, because the restaurants were tasty AND affordable! If you ever get the chance to visit Maui, you MUST eat in Kihei (several times)! 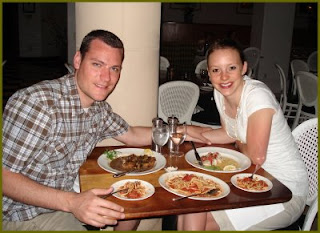 Upon returning back to normal life in Provo, Utah, the couple discovered that their food preferences had evolved. No longer were they content with “mediocre” meals, but desired to ALWAYS eat/cook only good food (good tasting and good for the body). If you have ever seen the movie Ratatouille, you will remember the food critic, Anton Ego. Lindsey and Stew identify with one line from the movie that explains their love of food. Speaking to Linguini (the head cook), Anton said, “I don't like food, I love it. If I don't love it, I don't swallow. I will return tomorrow night with high expectations...pray you don't disappoint me.”

Those who love food have high expectations. Lindsey and Stew believe that good food feeds the soul—not just the body. So in an effort to help their family and friends get as much joy out of eating as they do, this blog was created. The blog contains reviews of restaurants they visit, as well as yummy recipes from the Campbell kitchen.

PS- We would love to hear your comments! Feel free to drop us a line!

janica said…
awesome! is there a way that lindseys YWL sales copies?? I LOVE good recipes and new things to try:) Good idea guys, i'll be keeping updated on checking the blog often;)
July 30, 2009 at 3:10 PM

Stew and Lindsey Campbell said…
Jan--If you click on the her YWL's name in the blog posting (i.e. Liz Edmunds)---it's a hyperlink to her website where one can get info to purchase the book! Seriously--we have loved EVERY recipe she has in that book!
July 30, 2009 at 4:44 PM