A few days ago, a friend mentioned on her blog that she was in search of the best cinnamon roll recipe. It just so happens that I was baking my favorite cinnamon rolls a few days later, so I promised her I would blog the recipe!
I thought the recipe was originally from my grandma, but my mom told me she actually got this recipe from a ward cookbook! The cinnamon rolls are so fluffy and soft, and the cinnamon frosting is really what makes these our favorite recipe! So here's the recipe, just for you, Janica (and anyone else who wants a fantastic cinnamon roll recipe)! 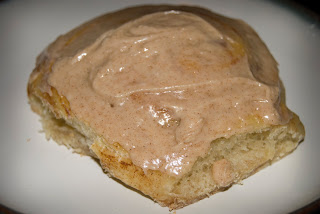 [I have to apologize for the pictures, they don't look as good as they taste—I actually made the dough a month ago and froze it. They were still good, but not as moist...probably in the freezer a little too long. Great to do if you're only feeding two people though!]

Directions:
Combine water and yeast. Let stand, covered, for five minutes. Mix in milk, sugar, oil, salt and mashed potatoes. Beat in eggs. Add two cups of flour. Mix well. Keep adding the flour (not all at once or you risk the dough getting too dry) until the dough is dry enough to roll out.

Roll into a large rectangle 1/2–3/4" thick. Sprinkle with milk (or softened butter, but we like milk better—it makes them softer!) and spread with back of spoon (don't get it too wet). Sprinkle evenly with sugar and cinnamon all over. Roll lengthwise, away from you. Slice with thread or dental floss to 1 1/4" thick (a much easier way to slice than a knife! Just place a piece of floss under the dough, 1 1/4" from the end. Bring the floss up around the dough and cross it over the top, pulling and cutting through the dough!). Place on greased cookie sheet. Cover with waxed paper and let rise about 30 minutes. Bake at 375º for 20 minutes, until light brown.
Makes three to four dozen rolls, depending on size.

** Like I mentioned before, the rolls can be frozen before rising or baking. Place them on a greased cookie sheet and put them in the freezer for a couple hours, then pull them out and bag them. Let frozen rolls rise four or more hours or overnight (if eating for breakfast) before baking. 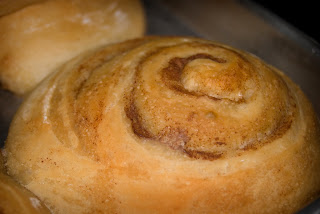 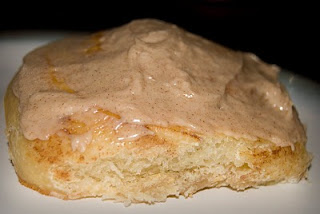 What to eat with cinnamon rolls? Liz Edmunds 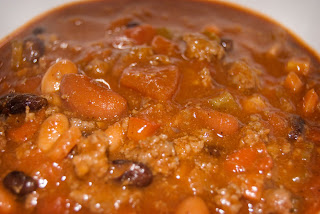 This opened up a whole new world of yum-ness to us!!! The flavor combination is absolutely fantastic! We love Liz's three-bean chili with these cinnamon rolls. I modify it a little: take out the sausage and add diced red pepper, carrots and celery to make it a little healthier!

What do you like to eat with cinnamon rolls?

janica said…
ok so i have yet to make these, but to make the rolls "fluffier" you just make sure when you roll the dough out that it's not too flat right? Mine are always skinny and I think it's cuz I'm rolling them out way too flat...
March 17, 2010 at 2:24 PM

Stew and Lindsey Campbell said…
There will be more cinnamon-y layers if you roll the dough thinner, but I'd try somewhere in between...also how thick you cut them (with the floss) will help- bigger will be fluffier...letting them rise long enough will help too.
Hope they're yummy and fluffy!
March 17, 2010 at 2:28 PM