I love homemade macaroni and cheese. Growing up, my mom made it a lot, and I loved it! I made it for Stew when we were first married and he'd never had homemade macaroni and cheese, and after he tried it, he said he'd never eat the boxed macaroni and cheese again (uh oh, now he's spoiled)!
We like to add a little cayenne pepper to make it more "grown up." I recently found a "lightened up" recipe from Cooking Light that was really similar in taste to my mom's original macaroni and cheese. It might even be a little richer, because there is cream cheese in it! With whole wheat pasta and steamed broccoli, this is a pretty healthy meal, and great for whenever the cheese craving hits! (Does anyone else get this craving?? No? Just me?) I've already made this at least three times, which is a record for me because I try new recipes so often! I've included both recipes, so try them both and see which one you like best! 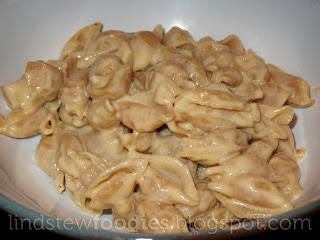 Directions:
Cook pasta according to package directions. Drain and set aside. Meanwhile...
Place flour, salt, and pepper in a large saucepan. Add milk, stirring with a whisk until well blended. Drop cream cheese by teaspoonfuls into milk mixture; bring to a boil over medium-high heat, stirring constantly (if you don't stir constantly, a layer of burned milk will form at the bottom of the pan, so don't scrape the bottom). Reduce heat; simmer 2 minutes or until thick and cream cheese melts, stirring occasionally. Stir in mustard and Worcestershire; simmer 1 minute. Remove from heat. Add cheddar cheese, stirring until cheese melts. Add cayenne pepper and stir. Combine pasta and cheese sauce in a large bowl or pan; toss well and serve!

Directions:
Cook pasta according to package directions. Drain and set aside. Meanwhile...
Whisk flour and milk together in a saucepan. Cook over medium heat, stirring often, until thick. Add cheese, stir until evenly melted. Remove from heat and add Worcestershire sauce. Combine pasta and cheese sauce in a large bowl or pan; toss well and serve!
This cheese sauce is also great over whole-wheat toast or veggies!

Cartier Family said…
I remember you and your sisters insisting that you have homemade Mac and cheese for lunch but I'm pretty sure I didn't make it like this! I'll definitely have to give both of these recipes a try!
January 30, 2011 at 12:52 AM