We love Liz Edmunds' recipe for white chicken chili, so when I saw this recipe for white turkey chili, I was a little leery (don't fix it if it isn't broken!), but I made it anyway. I'm so glad I did, because we liked it BETTER than our white chicken chili!! It's so fresh and flavorful, and the fresh lime juice is a MUST!!  It's super healthy too, and we're adding this recipe to our stack of faves! Can't wait to make it again! 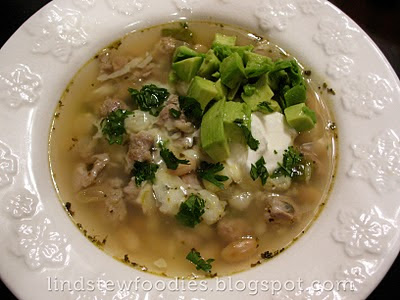 Directions:
Heat the oil in a large pot over medium heat. Add the onion, celery, peppers, and cook, stirring occasionally, until the vegetables are soft, about eight minutes.
Add the garlic, cumin, cayenne, and oregano and cook, stirring, until fragrant, about 30 seconds.
Add the ground turkey and cook, breaking up the meat with a spoon, until the meat is no longer pink, about four minutes.
Add the white beans and broth and cook for ten minutes.
Serve topped with sour cream, cilantro, avocado, and a good squeeze of lime juice.

We served it with a nice loaf of crusty bread!

I'm not going to say anything more than you should make this! It's a new fave!! Let us know how you like it!
Labels: Gluten Free Recipes Main Dish Soup Recipes

Anonymous said…
this looks delicious! We have the traditional turkey chili. This will be a fun variation to try, thank you!
January 10, 2011 at 8:02 AM