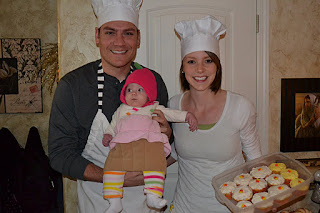 Our little Hattie-cake and her bakers, and the candy corn cupcakes we made for a Halloween party.

Cupcakes have become really popular in the last few years...and I have to admit...I'm not a cupcake person (please don't shoot me). I mean, I won't say no to a good cupcake now and then, but I definitely wouldn't pick a cupcake over a yummy cookie.
For the Campbell family Halloween party we were in charge of a dessert. I was going to make pumpkin cookies or some other festive treat, but then I got thinking...Hattie's Halloween costume is a cupcake...it would be cute if we took cupcakes to the party. Once I mentioned that thought to Stew he wouldn't have it any other way! I remembered seeing candy corn cupcakes online in several places and thought they'd be an easier cupcake to make (seeing as I'm a novice cupcake baker).
I didn't want to just use a boxed cake mix, but I wasn't about to make them from scratch. I knew of two ways to make a cake mix taste homemade, and since I made a double batch, I did them both! I filled the muffin tins a little too full however, and this is what the first round looked like out of the oven. 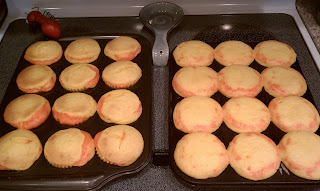 Sorry for the bad phone photo, I texted this to Stew with the caption, "The cupcakes exploded!" 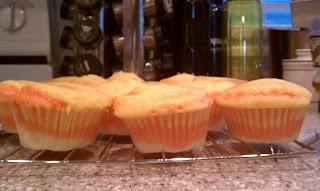 Then I sent this photo to Stew saying, "They are actually pretty cute from the side!"

I think cupcakes have frosting on top to hide the flaws...right? Topped with the best buttercream frosting I've ever made (I figured out the secret to a good buttercream!), these cupcakes were actually pretty delicious, and I admit I looked forward to eating the leftovers days after.

Directions:
Preheat oven to temperature called for on box. Prepare muffin tins with white paper holders (or something you can see through).
Make cake mix as directed on box, either substituting milk and butter for water and oil, or adding sour cream at the end.
Divide batter into three separate bowls. Add yellow food coloring to one bowl, yellow and red to another, and keep another bowl white.
Drop a spoonful of white batter into each muffin "hole" (is there a proper name for that?), and spread evenly over the bottom. Follow with orange, and then yellow. **Be careful not to fill the muffin tins too full, especially if you added sour cream to the batter, as that tends to make the muffins expand more.
Bake cupcakes for the time recommended on box. Let cool, then frost!

Directions:
Place butter in a small bowl of an electric mixer. Beat butter until it is as white as possible (the step I've always missed!). Gradually add about half the sugar, beating constantly. Add the rest of the sugar and beat until smooth. Mix in vanilla, and milk if needed. Frosting should be smooth and easy to spread. Add extra milk or sugar until frosting is spreadable.
Keep frosting white, or color yellow or orange. Spread on top of cooled cupcakes with a knife (or if you're fancy, pipe it on). Top each cupcake with a candy corn. Enjoy!

Need an easy Halloween dinner recipe? This is what we'll be having.
Check out all our pumpkin recipes!
Labels: Dessert Recipes Holiday Recipes

Heather said…
They look yummy Lindsey! (And Hattie is adorable in her costume!) I'm not a cupcake person either. I like cake just fine, just not cupcakes! Ah well...these look yummy enough to try!
October 30, 2011 at 4:21 PM