I was just going through my pictures and saw these from Thanksgiving 2008, and although it might be a little late notice for those of you who have been baking today, I wanted to post this recipe and idea before I forgot.
My mom has made these rolls for Thanksgiving the past five years or so (maybe longer...whenever she is in charge of the rolls for dinner). I just love how festive and cute these rolls are!! I've made them with her before, and they're even easier than crescent rolls.
Try them with your favorite roll recipe for Thanksgiving tomorrow! Don't have a favorite roll recipe? Here's mine:

In a separate bowl, blend:
3 eggs

Dough will be sticky. Let rise until double, two to three hours. Then split dough in half and roll out into a circle, 1/4 to 1/2 inch thick. Then with a pizza cutter, cut dough like a pizza, with slices about three inches at the thick end. This is the fun part: place a triangle of dough in a greased muffin tin cup and using scissors, cut “feathers” at wide end of dough (about 1/2 inch to 1 inch down), like so: 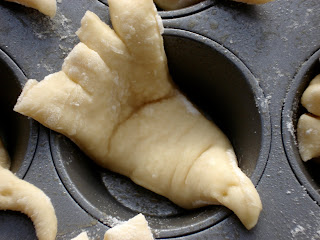 Then using a toothpick, poke two eyes at the skinny end of the dough.

Bake at 400° for about ten minutes, until golden brown. Watch them closely, as “feathers” can burn easily. 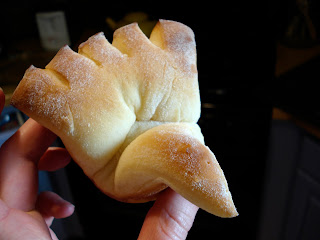 Aren't they so cute?? A simple and great way to add a festive touch!
Labels: Bread Recipes Holiday Recipes