I'm loving soups lately. We have soup at least twice a week. This is one I've made a couple times. The original recipe is a Zupas wannabe found here. The first time I made it, I followed the recipe exactly (except adding a little cayenne). It was good, but there's a lot of cheese in it, so it's not so healthy. I found a creamy broccoli soup recipe that used cannellini beans to thicken the soup. So I combined the two (using cauliflower) and came up with a lighter recipe that's just as yummy! And it's really fast! 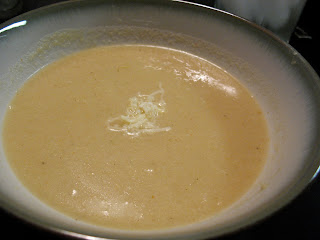 Directions:
Place onions in large saucepan over medium to high heat. Cook until golden and soft, five to ten minutes, adding a little broth if it is sticking to the pan (or you could use a little olive oil). Pour broth into pan and bring to a boil. Add the cauliflower, cover, and bring back to a boil. Reduce the heat and simmer until soft, about eight minutes. Stir in the beans and simmer for three to four more minutes.

Use an immersion blender and puree the soup (I had to let mine cool slightly because mine is plastic), or transfer to a blender. Puree well to take out all the lumps. Add the spices and cheese (I didn't add all the cheese here, we sprinkled it on what we wanted as we served it), if desired (I think it would also be good without the cheese). Let cheese melt until smooth.

Garnish with croutons and more cheese, if desired. We like this soup with a great baguette!