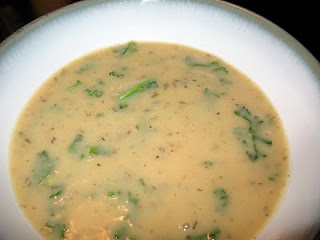 This soup is really tasty! And very healthy! Stew asked me if there was cheese in it, and he didn't believe me when I said no! The creamy thickness comes from potatoes and other veggies that you puree! I will definitely be making this again.

1 Tbsp Olive Oil
2 cloves garlic, minced
1/2 cup yellow onions, finely chopped
1 cup leeks, sliced (I had never bought leeks before. They look like giant green onions, but you can only use the white part, the green leaves are too woody. I only bought one for the recipe.)
1/2 cup celery, chopped
1/4 cup white wine (I substituted chicken broth)
4 cups vegetable or chicken broth
2 cups water
3 cups potatoes, peeled and diced (I kept some of the skin on)
1 1/2 cups parsnips, sliced (Again, I'd never bought parsnips. They look like huge white carrots. I only bought one for the recipe.)
1/2 cup carrots, diced
1 Tbsp Dijon mustard (I didn't have this, so I just used a little dry mustard...not the same thing, I know, but it worked.)
2 Tbsp Fresh Thyme (Didn't have fresh so I used 1 Tbsp dried, but then scooped some out because it looked like a TON! Glad I did.)
2 Tbsp Fresh Oregano (I ran out of dried so I used 1/2 Tbsp Oregano and 1/2 Tbsp Marjoram)
1 tsp Dried Sage (Didn't have this...can you tell I didn't read all the way through the recipe?? I used a little more Marjoram and Basil.)
1 cup Milk (I used a can of lowfat evaporated milk to make it creamier, since we drink skim)
1 bunch of kale, stems removed and diced (At first I cut it into strips, and after our first bowl, I took scissors to the pot and cut the kale smaller)
Salt and Pepper, to taste

In a large pot, heat olive oil over medium heat. Saute the garlic, onions, leeks, celery, and carrots for five minutes until softened. Add the wine (chicken broth) and cook for another 2-3 minutes to reduce. Add the water and broth, potatoes, and parsnips and simmer for about 20 minutes (mine went faster), partially covered, until the potatoes and parsnips are tender. Use a blender or hand blender to puree the soup until smooth. Stir in the mustard, herbs, and milk. In a saute pan, gently wilt the kale with 1 to 2 tablespoons of water. When the kale is tender, add it to the soup. Season with salt and pepper.
We served it with some turkey bacon and cheddar cheese on top. I think the bacon adds some dimension. 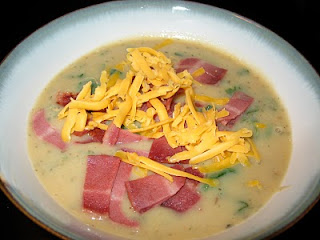 I know it looks like a lot of ingredients, but this soup really didn't take me that long. Hope you try it! Enjoy!