While in St. George, we visited The Orange Peel smoothie shop for breakfast before we headed to Las Vegas. They also serve bubble tea (haven't heard about it? It's interesting—click here) and self-serve frozen yogurt (who doesn't these days? But hey, I'm not complaining, I love frozen yogurt!).

Inside there was a prevalent sign posted saying "no photos" were allowed, so we tried to sneak one on the way out. 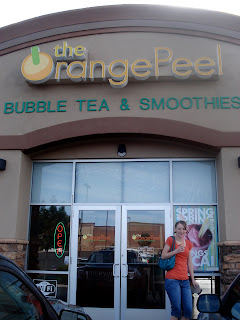 Inside it's a pretty typical smoothie shop: bright colors, the smell of fresh citrus, and whirring blenders behind a glass counter. They do something different than typical smoothie places with the packaging though: 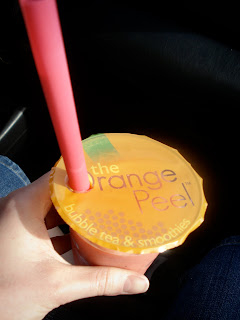 The lid is sealed shut in a machine, then you poke a giant straw through it. This is how bubble tea is packaged (before The Orange Peel did it, like in Taiwan), but it's cool to have a smoothie that will not spill as easily!

They have over 30 flavors, not including bubble tea smoothies. We got their two most popular flavors, Big Kahuna and Brazilian. Stew got the Big Kahuna, which was the sweeter of the two and had pina colada, strawberries, and banana. Lindsey got the Brazilian, which was more tart and had passionfruit with strawberries and peaches. We each thought the flavor we picked was the best (it was fun to keep switching smoothies though).

Overall we liked it. It's a little pricey: $3.99 for a 12-ounce smoothie, but we'd go back again (especially if we had a full punch card for a free smoothie, like we did this time—buy 10 get one free). But it didn't stand out too much from say...Jamba Juice (maybe if we got bubble tea smoothies it would have, but we've had bubble tea before and think it's just kind of weird). 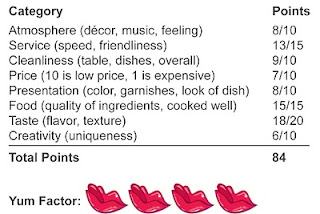 We did notice that their frozen yogurt prices are (currently) cheaper per ounce than Krave, another self-serve frozen yogurt place. So visit The Orange Peel next time you're in St. George if you want something cool and refreshing! We probably will!

: : And if you haven't entered our 100th post giveaway, do it now!! : :
Labels: Restaurants St. George Restaurants

Alex said…
Okay, so you've posted before about little treat shops you like to visit. I've got another one for you for the next time you are in Provo/Orem. It's called The Chocolate, and is located on 212 State Street in Orem. The inside is adorable, a little house converted into a dessert cafe, and the desserts are delectable and gourmet. You should most definitely check it out! I think Stew would like it too.
Alex Evans
May 27, 2010 at 7:49 AM