So it looks like Lindsey miscounted our number of posts because we had a "draft" that hasn't been posted yet. So PSYCH on the 100th post giveaway, you'll have to wait one more post! How about a restaurant/cupcake review in St. George instead? Okay? Okay. 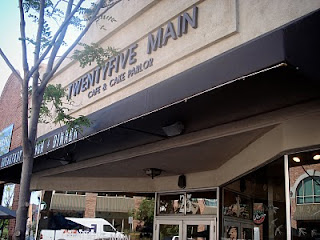 On our trip to St. George a couple weeks ago, we ate dinner at Twenty Five Main with Stew's parents. Twenty Five Main is another "hip" cafe that hopped on the cupcake-craze wagon. They serve sandwiches, pizzas, soup, paninis, salads, breakfast, smoothies and of course, cupcakes.

The inside is cute but a little cheap-looking. The menus are on the wall and you order before you sit down, which can be a little hard if you have serious menu indecision (like Lindsey) and there are people behind you waiting. 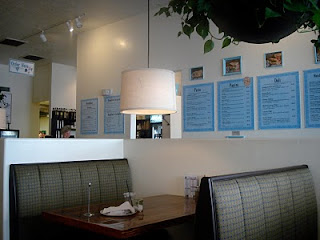 We got our food pretty fast, but were slightly disappointed when it was put in front of us. The portions were fairly small. Dad ordered the BTA (bacon, tomato, and arugula) panini, but can you even see the filling between this bread? 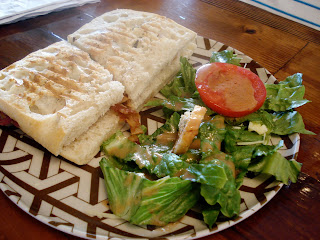 With the paninis, you can either order a "micro" salad (which is really micro), or potatoes. Mom got the potatoes with her ham and cheese panini. 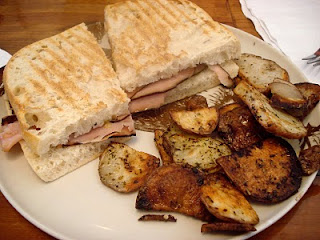 Stew ordered the smoked turkey panini with bacon and sundried tomatoes. The sandwich was good, he just wished there were more of it. 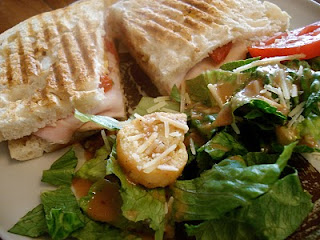 Lindsey was glad she got the "full" portion of the strawberry poppyseed salad. 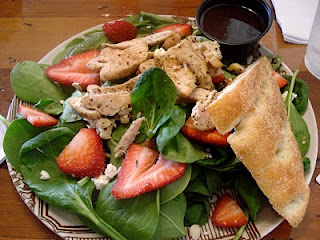 Since we all have a sweet tooth, we had to get cupcakes. Stew ordered SIX cupcakes for the four of us to share. We cut them in fourths and sampled all the flavors. 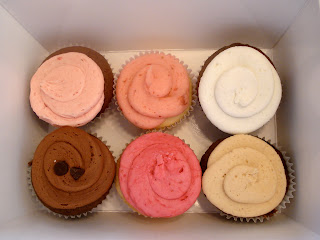 Flavors from the top left going clockwise: Chocolate Strawberry, Vanilla Strawberry, Chocolate Vanilla, Peanutbutter Cup, Raspberry (or was it strawberry?) Lemonade, and Original Chocolate.
We thought the chocolate and the chocolate vanilla tasted almost the same. The peanutbutter cup was good, but the raspberry lemonade cupcake was our very favorite. The cupcakes weren't the best we've had, but they were a nice sweet ending to the meal. We decided the food portions were perfect if you also ate a cupcake after the meal. :)

So our rating was 70/100. Lindsey was slightly disappointed—mostly because her hopes were high for Twenty Five Main. We had a basic good meal, but it was nothing to write home about! 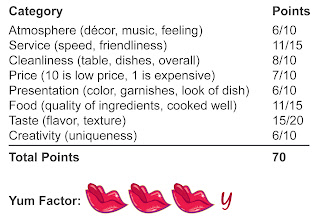 Thanks for the good company Mom and Dad! We had fun! The cupcakes helped too. ;)
Labels: Restaurants St. George Restaurants