I was feeling ambitious one day (which ended up being the ONLY day that whole week I felt "ambitious" and made a meal that took more than 20 minutes) and decided to make fresh bread to go with Summer Corn and Squash Chowder (recipe coming soon). I scoured my cookbooks, and found a french bread recipe from my Better Homes and Gardens cookbook that looked easy enough, so I started. Well, I should have looked at my flour supply, because it was LOW! I did have whole wheat flour though, and was planning on using half wheat flour anyway, but I ended up using more than half because I ran out of white. The bread turned out a little denser and sweeter with more wheat flour, but it was still GREAT! Perfect for soups. We made garlic bread with the leftovers to go with pasta the next night, and I still have the second loaf in the freezer, just waiting to be made into French toast! 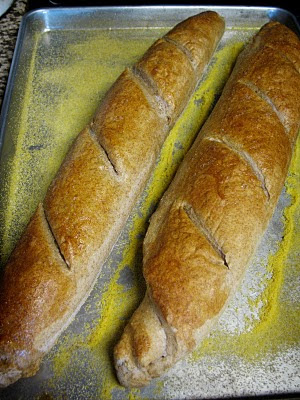 I let it rise longer than usual, because I biked to the store to get some corn on the cob for the chowder (I decided the frozen corn it called for was just stupid in the summer). But I think extra rise-time is better than not enough. I hate it when my bread turns out too dense.

Directions:
In a large mixing bowl stir together 2 cups of the flour, yeast and salt. Add the 2 cups of warm water to the flour mixture. Beat with an electric mixer on low to medium speed for 30 seconds, scraping bowl constantly. Beat on high for 3 minutes. Using a wooden spoon, stir in as much of the remaning flour as you can.
Turn dough out onto a lightly floured surface. Knead in enough remaining flour to make a stiff dough that is smooth and elastic (8–10 minutes). Shape dough into a ball. [If you used rapid rise yeast, skip this next four sentences] Pace in a lightly greased bowl, turning once to grease dough surface. Cover and let rise in a warm place until double in size (about 1 hour). Punch dough down. Turn dough onto a lightly floured surface.
Divide dough in half. Cover and let rest for 10 minutes. Meanwhile, lightly grease a baking sheet; sprinkle greased baking sheet with cornmeal.
Roll each dough half into a 15x10" rectangle. Tightly roll up, starting from a long side; seal well. If desired, pinch and slightly pull/twist ends to taper them. Place shaped dough, seam sides down, on prepared baking sheet. In a small bowl and with a fork, whisk together egg white and 1 Tbsp water. Brush some of the egg white mixture over loaf tops. Let rise until nearly double in size (35 minutes to 1 hour).
Preheat oven to 375º. Using a sharp knife, make three or four diagonal cuts about 1/4 inch deep across each loaf top. Bake for 20 minutes. Brush again with some of the egg white mixture. Continue baking for 15–20 minutes more or until bread sounds hollow when lightly tapped. Immediately remove loaves from baking sheet and cool on wire racks.
*You can also make four smaller baguettes by dividing the dough into four. Just reduce second baking time to 8–10 minutes.*

Who can resist hot, homemade bread? Definitely not me (as evidenced): 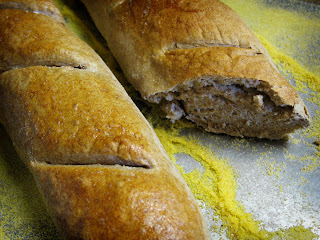 Anonymous said…
Thanks for posting this! I've been looking for a whole wheat french bread recipe to go with soups this fall. And love your restaurant ratings. Great to get an opinion before going!
August 20, 2010 at 8:05 AM