We were recently invited to dinner at Tuscany, an award-winning Italian restaurant in Cottonwood Heights, with Senga and Joni. It is a large and beautiful dimly-lit restaurant surrounded by a forest (well, not really a forest—just trees), which makes for a secluded, picturesque dinner. It’s also a popular wedding dinner/reception venue (we only got a glance of the patio outside, but it looked large and nice). We had heard of it and were excited to go, since we'd probably never go there ourselves!
So let’s get to the food. As an appetizer we had a flatbread topped with smoked salmon. It came out and I was surprised to see caviar on top! This was something we’d never tried... 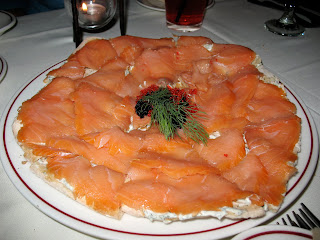 and honestly probably won’t try again. We like to try new things and branch out, but neither of us cared for the fishy taste. The appetizer as a whole was fun to try as well, but we think a lover of smoked salmon (which neither of us are) would like it better.

[I’m apologizing for the poor quality of the photos, it was really dark inside, so some are blown out with the flash, and some are dark—Photoshop only fixes so much.]

The salads were fresh, with a light vinaigrette. They were good. 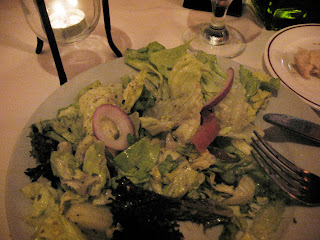 Time for the main course. The presentation was great on all the dishes and when they came to the table we oohed and awed.

Stew ordered the biggest rib-eye I've ever seen (good thing Stew didn't eat the whole thing, he would have had a heart attack!) was cooked perfectly and was tender and juicy. 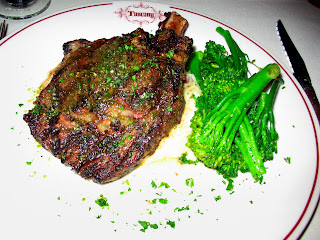 I got the salmon crusted in pancetta pesto. But honestly, I don't think it was pancetta or pesto...it tasted like breadcrumbs to me. But it was still delicious salmon! Right up there with the best salmon I've had (made by friends Ryan and Lisa—Ry's a pro at grilling salmon)! 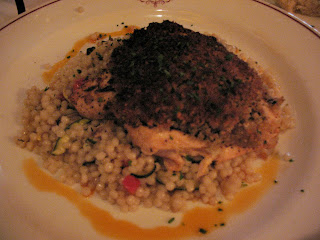 Senga and Joni both got white fish, one was the fish of the day, the other is halibut (not sure which is which). We had a bite of them and they were really smooth and delicious. 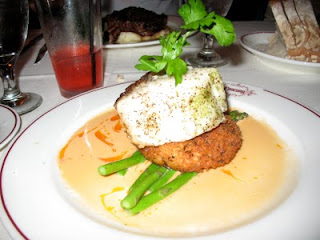 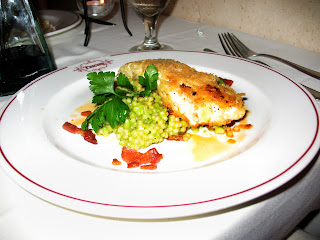 We tried three different desserts. Stew got the strawberry shortcake, which was probably our favorite dessert out of the three, with a dense more savory cake to compliment the sweet strawberries. 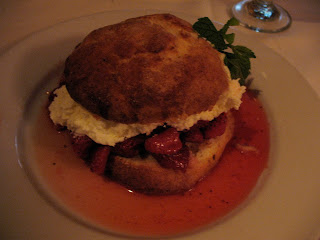 We also got peach cobbler, which I was disappointed with because it wasn’t even hot! I’ve never had cold cobbler, and in my opinion, the best part of eating cobbler is the hot cobbler and cold ice cream! 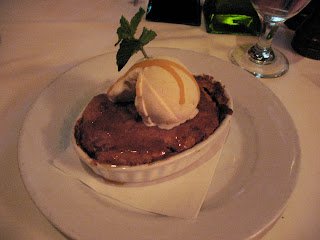 We also tried the creme brulee, which was a good creme brulee with a thick sugary crust on top. 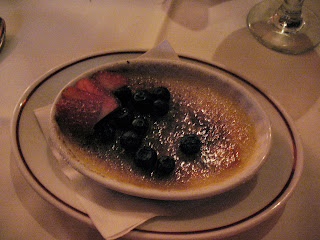 We left pretty full, and honestly could have done without the desserts, but it was a nice (nice meaning fancy and tasty) dinner. 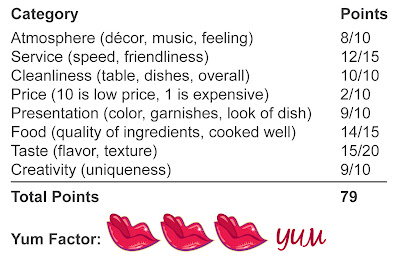 If you get the chance to dine at Tuscany, let us know how you liked it!