I love when bananas start to get like this: 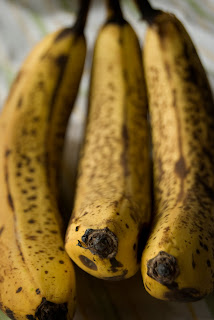 Sometimes I even buy a few extra so I can make a banana treat. I should have let these bananas brown a few more days because it make banana bread even more delicious, but I couldn't wait!
This is the best plain banana bread recipe I've ever found (or eaten for that matter). Grandma knows best! The soured milk, vanilla, and cinnamon in this recipe give it that extra richness. 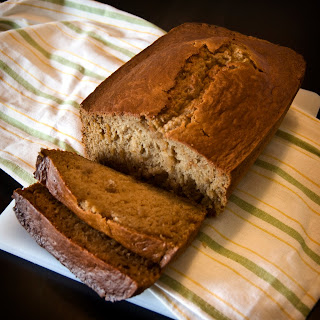 Here's a fun story for you: when Stew and I first started dating, he had some REALLY ripe bananas on his counter. I'm talking black everywhere, soft to the touch ripe. Questionably unusable ripe. I asked him what he was going to do with them. He said, “I've been meaning to throw them away.” I said, “Can I have them? I've been wanting to make banana bread.” He obliged, probably thinking I was crazy, and gave me a sack to put them in (that's really how ripe they were). Well, I went home and made banana bread (and of course had him over to eat it with me). He said it was the best banana bread he'd ever eaten.

What do we get from this story? 1- The way to a man's heart is through his stomach, especially with banana bread. And 2- The blacker the banana, the better the bread (to an extent—I had one less-ripe banana that I mixed with the black ones, so I think that helped a little).

Growing up, we ate banana bread for dinner probably monthly, and we always loved it. When I got to college, I found out that was a little unique. So what do you eat with banana bread to make it a meal? We like hard-boiled eggs. 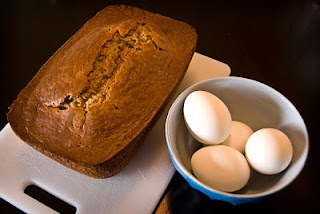 So without further ado (can you tell I really love banana bread?), the recipe:

Directions:
Preheat oven to 350º. Blend bananas, egg, oil and milk together (I usually use a hand blender for the bananas, then do the rest in my KitchenAid). Mix in the rest of the ingredients. Mix well. Pour into a greased loaf pan. Bake for one hour, or until toothpick comes out clean. The bread might look pretty dark on the outside, especially if the bananas are darker, but don't worry—it's not burned.

*Note on the sour milk: I recently tried substituting buttermilk, since I had some on hand. The bread was still good, but I think I prefer the lemon juice-soured milk. I've also used lime juice and that works too.

Is it ok to put very ripe bananas in the freezer until you are ready to use them?

Have you ever done that? Any advice?

Stew and Lindsey Campbell said…
Hey Maggie!
You can totally freeze ripe bananas! Just peel them, break into chunks and put in a ziploc. I've done this before when I only have one ripe banana and need a few to make something. Then just put them in the fridge a day before you want to use them.
April 15, 2010 at 9:18 AM