I recall not really liking tamale pie growing up (no offense, Mom—my tastebuds have probably just "matured" since then). But I'd seen a few recipes that got me thinking about it again, so I decided to make it one night.

For those of you who have never tried tamale pie, it's like a Mexican chili (beans, beef, peppers, onions, spices—you know, the good stuff) topped off with corn bread (literally). It's like comfort food goes to Mexico. 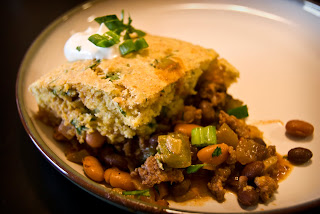 I found a recipe for two-bean tamale pie in my Better Homes and Gardens cookbook and tweaked it (I had some beef that wanted to be used). Since I added beef, it made double, so I froze half of it. I also used their cornbread recipe (of course, tweaking it), but you can use packaged corn bread mix if you want.

***Important note! The filling recipe will make a 9x13 pan (because who wants to use 1/2 a can of beans?), but the cornbread recipe is for a 9x9 pan. I'd suggest freezing half the filling to make again later. Or if you're feeding more than four people, just double the cornbread and bake in a 9x13. You could also omit the meat and halve the spices for a 9x9 vegetarian meal. Did I confuse you? On to the recipe! >>

Directions:
Grease a 9x9 inch pan with cooking spray and set aside. Preheat oven to 400º.
In a large skillet, brown beef (or turkey—with a little oil) for a few minutes, until it is no longer pink on the outside. Add onion, pepper and garlic and cook until tender and the meat is cooked through. Stir in beans, diced tomatoes, green chiles, chili powder and cumin. Heat through. Spoon bean mixture into prepared dish and spread around evenly.
Top with cornbread batter (see recipe below). Spread evenly, touching all sides of the pan (so the meat mixture doesn't burst up through, and because I'm OCD like that).
Bake, uncovered, about 25 minutes or until cornbread is golden and a toothpick inserted in the center comes out clean.*
Serve with salsa, sour cream, green onion, extra cilantro, cheese, avocado...anything you'd put on tacos really.

Directions:
In a medium bowl stir together flour, cornmeal, sugar, baking powder and salt; set aside.
In a small bowl, combine eggs, milk, and oil. Add egg mixture all at once to flour mixture. Stir until just moistened. Gently stir in cilantro and cheese until evenly distributed.

*Note: If using frozen filling leftovers, plan to thaw your meat mixture before. If your meat mixture is still a little frozen it takes longer to cook. Mine went for almost double the time for the cornbread to cook through (it didn't burn on top though—just got a little darker).

We just ate the leftovers last night! I think this recipe will make it into my regular rotation! Hope you like it!
Labels: Dinner Recipes Main Dish Mexican Recipes Pie Recipes

FabFrugalFood said…
I love Tamale Pie - and it is one of my daughter's favorite foods. I'll be making your recipe on November 4th (her birthday!).