Pasta with Bacon, Tomato and Leeks

I saw this recipe on Rachael Ray a couple days ago. She said it's a spring version of another one of her pasta dishes. I know bacon (or pancetta) is a common ingredient in Italian dishes, but I'd never tried it. I had a little leftover turkey bacon in my fridge, so I decided to try it! We both really liked it!! 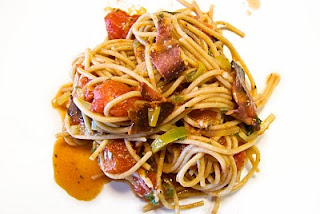 And since this recipe is from Rachael Ray, I decided to participate in Taste and Tell's Saturdays with Rachael Ray. Great food blog, check it out!

Pasta with Bacon, Tomato and Leeks

Directions:
Heat a large pot of water to boil for the pasta, season with salt and then cook pasta to al dente while preparing sauce.
In a large skillet with a lid, cook bacon (you can add a little olive oil here, but I didn't) over medium-high heat until crisp. Move to paper towel covered plate. Drain off some fat if pan has more than a couple of tablespoons of drippings. Add sliced leeks or Vidalia onions, garlic and hot pepper, and saute 2–3 minutes. Then add tomatoes and stir to combine. Cover pan. Shake pan occasionally and cook until tomatoes begin to burst (if you're using cherry tomatoes), 6–8 minutes. Uncover pot and mash up tomatoes with a wooden spoon, and wine and stir 1–2 minutes. Season the sauce with some salt and pepper to taste, then reduce heat to low.
When pasta is ready, add pasta (and a ladle of the cooking water if you need more liquid, but I didn't) to sauce, along with parsley and bacon. Toss 1–2 minutes with an extra tablespoon of olive oil (again, I left this out). Turn off heat and toss in basil and cheese. Serve immediately.

One thing I love about pasta dishes, and this dish was no exception, is how quick they come together! A great dinner in 30 minutes or less! Can't get any better!

Deborah said…
Thanks so much for playing along - I hope you can join in in the future, too! This looks wonderful - I actually have this on my list of things I want to make!
April 19, 2010 at 9:29 PM