I try to write weekly menu plans every week. Sometimes I follow them, sometimes I don’t. Well, Sunday rolled around and I discovered I didn’t have all the ingredients for ANY of the three meals I had planned for Sunday (three meal ideas because I’m indecisive). Way to go me! I couldn’t make shredded sweet pork tacos, cilantro lime chicken, or chicken fajitas. So instead, I poured bottled teriyaki marinade over some chicken, went to church, (taught Sunday school with Stew! Yikes!), came back and had to figure out what we were going to have with it! Rice was a given, but as far as veggies go, I had to get creative.
I looked in the fridge and what did I see? Popcorn popping on the—oh wait, no—a red pepper, half an onion, and some yellow squash (for a future recipe, but I used it anyway). The perfect veggies to grill on skewers! So I googled “Asian marinade vegetables” and clicked on the first link. Good to go, I had all the ingredients! 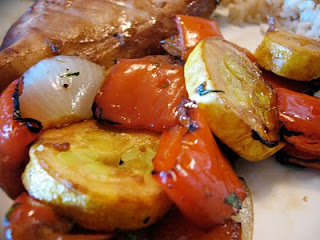 We decided when we were eating that a little more lemon juice would be good (but I actually didn’t measure anything because I halved the recipe, and I mean, it’s a marinade...you can’t go wrong). We even poured some of the marinade on the chicken when it was on the grill. It has a great fresh flavor, and the veggies were the highlight of the meal! Definitely making these again! Try them with any veggie you can grill (or broil in the oven)!

Directions:
In a microwaveable bowl or pan, add veggies that will take longer to cook (peppers).
Combine all ingredients in a bowl and mix well to combine. Pour half the marinade over the peppers (and other veggies in the bowl or pan); cover and microwave for two minutes. Add the rest of the veggies to the bowl and pour the rest of the marinade on top. Cover and microwave again for four minutes, until veggies are still crisp.
Grill on skewers or a grill pan, or broil in the oven for two to three minutes, turning occasionally. [The original recipe says to sprinkle the cilantro on after you grill them, but I didn't do this and it didn't burn.]