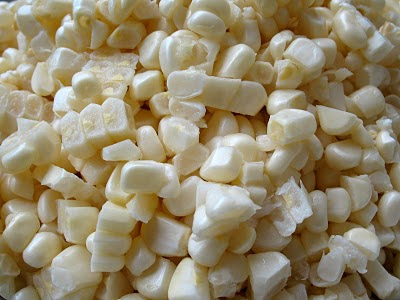 I've been on a corn kick lately. Fresh corn on the cob is one of my favorite summer foods—does it get any better?
Well, yes, I think it does. Summer corn fettuccine. That’s right. Corn in fettuccine. And it’s good! 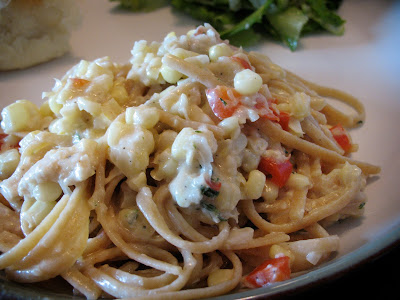 I just love “festive” recipes that use seasonal ingredients, and this pasta is really fresh! Not only fresh corn on the cob, but red pepper, thyme and basil! The sweetness of the corn and red pepper balance out the salty bacon and Parmesan. The crunch from the corn is amazing with the pasta, and since you cream half the corn (I used fat-free half and half!), the pasta seems extra creamy (without the calories!) and gets thickness from the corn. Thanks again, Rachael Ray, for another great pasta recipe! [And since this is a Rachael Ray recipe, I'm linking to Saturdays with Rachael Ray on the blog Taste and Tell. Check it out!]

Directions:
Cut the corn off the cob: put a small bowl upside down in a large bowl and steady a corn cob on the smaller bowl. Cut the corn off with a butcher knife. Reserve the corn from 2–3 cobs in a separate bowl.
Bring a large pot of water to boil over medium heat. Salt the water and add the pasta. Cook to al dente.
Meanwhile, heat a large skillet over medium to medium-high heat. Add a drizzle of olive oil and add the sliced chicken (if using). Cook until light on the outside. Add the bacon and cook for a few minutes until crisp and chicken is cooked through.
Add three-quarters (not the reserved bowl of corn) of the corn to the pan with the bacon (and chicken). Add the shallots and red pepper and liberally season with salt and pepper, to taste. Cook until the vegetables are tender, 5–6 minutes.
Add the remaining corn and half-and-half to a food processor or blender and puree until smooth.
Pour the chicken stock into the corn and veggies and simmer over low heat for a minute to reduce. Stir in thyme and corn-cream mixture and cook for 3–4 minutes to thicken, stirring frequently. Add the hot sauce or cayenne and season again with salt and pepper, to taste.
Drain the pasta and add it to a large serving bowl (I just put it in the large skillet with the sauce). Pour in the sauce, adding a couple handfuls of cheese, about 1/2–3/4 cup, and toss. Top with basil or tarragon and pass the remaining cheese at the table.

Make this while there’s still fresh corn around!! It just wouldn't be the same without it! [Or you could freeze fresh corn...I think I’m going to do that this year!]
Labels: Dinner Recipes Italian Recipes Main Dish Pasta Recipes Saturdays with Rachael Ray

Deborah said…
I can vouch that this is a delicious recipe! Thanks so much for participating in Saturdays with Rachael Ray!
August 5, 2010 at 4:30 PM