The other night I felt like making a new dessert, but one that was also healthy. I starred this recipe in my Google reader, but was a little wary to try it. Honestly, I didn’t think Stew would like it...a souffle made with Greek yogurt? I’m the only one who eats Greek yogurt in our house. So I told him I was making cheesecake souffles and was glad he was on the couch watching a movie while I was in the kitchen opening a Greek yogurt. :)

This dessert was EASY to make (the hardest part was beating the egg whites to soft peaks, which is only “hard” because it takes a few minutes), comes together fast (only 15–20 minutes in the oven, no cooling necessary), and tasted like a high end restaurant dessert! Although, I’d never had a souffle before this, so I had nothing to compare it to. This would be a great dessert for guests—I mean, look at it! 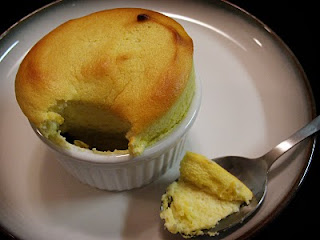 Since cheesecake is good with chocolate and caramel on top, we topped our souffles with hot fudge and caramel. 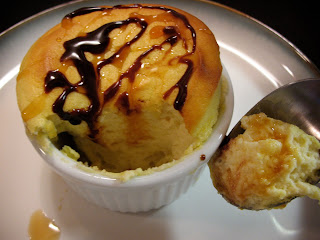 It’s a great dessert—not too rich, but rich enough. We both had two! And don’t be judging us, because look at the nutrition stats!

Directions:
Preheat oven to 375º.
Butter six 6-oz ramekins (or 8–9 muffin tins). Pour a small amount of sugar into each and roll the ramekins to coat. Set on a baking sheet.
In a large mixing bowl, whisk together yogurt, egg yolks, flour, salt and vanilla extract.
In a medium mixing bowl, beat egg whites and cream of tartar until foamy. Gradually stream in sugar and continue beating on medium-high speed until all sugar has been incorporated and egg whites form soft peaks.
Working in two or three batches, gently fold egg whites into yolk mixture with a whisk or spatula. Make sure all egg whites have been fully incorporated.
Divide mixture evenly into ramekins, using about 1/2 cup in each.
Bake on baking sheet for about 15 minutes, until evenly risen and lightly browned around the edges. [Mine took about 5 minutes longer]
Serve immediately. NOT good leftover (yes, I did eat one leftover, but it's not half as good when it's sunken down).

Thanks, Baking Bites, for the great recipe!

Stew and Lindsey Campbell said…
You can buy it at pretty much any grocery store. Yoplait and Dannon both have Greek Yogurt. It's by the other yogurt...both of those brands have a blueish container. It's pretty expensive though—I only buy it when I have coupons!
Oh and make sure to get the plain kind, not flavored. :)
July 29, 2010 at 1:56 PM