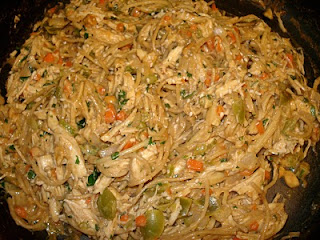 This recipe has been staring at me for months and last night I finally decided to make it. I'm SO glad I did! It tastes like it came straight from a restaurant, but better! I think I could eat this every day! Too bad there are no leftovers for me for lunch! And this recipe was so easy, especially because I used leftover spaghetti (just stick the noodles with a little olive oil in the freezer)! It's peanut-y, but Stew (who doesn't really like peanut-y things) loved it! Plus it's healthy, with wheat spaghetti noodles and all the veggies, and I omitted the oils called for in the other recipe.
Here is the recipe with my modifications:

Ingredients
1 pound whole wheat thin spaghetti noodles
2 garlic cloves, peeled
1 (1 inch) piece of fresh ginger, peeled (I didn't have this and just used 1 tsp of ground ginger, but I think the fresh would be fantastic!)
1/2 cup peanut butter (I used crunchy, but next time will use smooth)
1/4 cup soy sauce, or more to taste
2 Tbsp brown sugar
1 Tbsp rice vinegar
1/2–1 tsp cayenne pepper (I used just under 1 tsp and it was the perfect amount of heat)
1/2–1 cup hot water (depending on how thick you like the sauce, I did about 3/4 cup)
1/2 cup finely chopped white onion
1/2 cup finely chopped bell pepper (the original recipe called for red or orange, but I used green)
2 carrots, finely chopped
2 stalks of celery, finely chopped
Water chestnuts (we decided these would be good as well)
2–4 chicken breasts, cooked and shredded (I say 2–4 because I did 2, but I think I used less pasta as well)
1/4 cup finely chopped cilantro
1/4 cup dry roasted peanuts, chopped
Sesame seeds for garnish
Salt to taste

Directions
Place garlic and ginger in a food processor until well chopped. Add peanut butter, soy sauce, brown sugar, vinegar, and cayenne pepper. Pulse until well combined and slowly add hot water (I only added 1/2 cup here, I did the other 1/4 at the end to thin it out). Set aside.
Saute onion, bell pepper, carrots, and celery in a hot skillet over medium heat (with a small amount of vegetable oil, if needed) for about five minutes, or until soft. Stir in chicken breast and noodles. Then add cilantro and chopped peanuts. Garnish with sesame seeds. 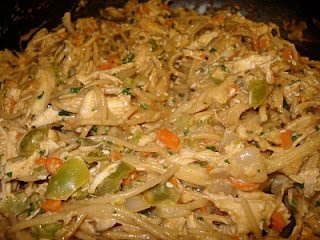 Give it a try, it won't disappoint!!

: : Update: This recipe also works with thin strips of beef instead of chicken. : :

Stew and Lindsey Campbell said…
It's really good—tastes like it's from a restaurant! I'm actually making it tomorrow night for my grandparents. I'm excited to eat it again :)
December 28, 2009 at 9:46 PM

Melanie Sharp said…
Lindsey - I found your blog through a link on your Facebook, and made these yummy Thai noodles for dinner last night. I didn't have celery, so I used cabbage, and I didn't have peanuts so I used chopped cashews. This really was so yummy. Hope life is great for you! Sounds that way :-)

Stew and Lindsey Campbell said…
Glad you liked it Melanie! The cabbage is a good idea! Good to hear from you! Your kids are so adorable!

We made this tonight, exactly as the recipe said and LOVE IT!!! Amazing, just soooo good! Easy and my two year old even liked it (she's so finicky!)

Thank you thank you!!!