We decided to try La Dolce Vita for dinner on Friday. 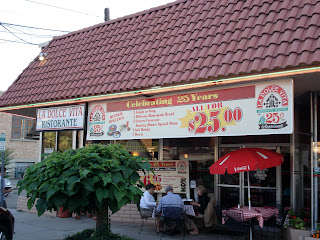 It looks kind of dumpy on the outside, but we thought it might be a hidden gem. 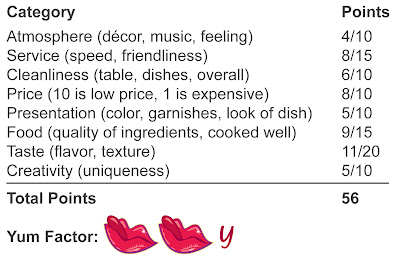 When we first walked inside, we weren't sure who would seat us. The hostess was in normal trendy clothes (NOT a good thing at restaurants...if you're looking to add class, dress uniformly!). Our waiter was in a striped polo muscle tee. The walls were badly faux-finished in a gross mauve color and there were weird plaster things and ugly paintings on the wall (way too many decorations). The table felt kind of sticky, and we saw a table falling apart underneath.
They had a 25th Anniversary deal going on: two meals, two side salads or soups, and one dessert for $25. Good price, but not for the amount of food were given.
Our server brought us bread (free food is always a plus). In the foil-wrapped basket there were two small pieces of greasy toasted bread...but they did have oil and balsamic vinegar to dip it in. 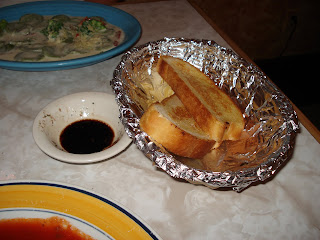 When we go to restaurants, we like to ask the server what the restaurant is known for, or what a popular dish is. When we asked our bodybuilder-wanna-be/server this question, he said, “Uh...all of them. Yeah, everything...our sauces are totally different than any other place.” Cop out! And as for their sauces being different...are they different because they just open a can of tomato soup? This was Stew's Neopolitan Calzone: 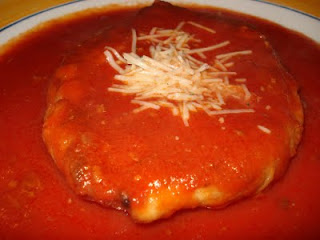 The sauce was so bland and tomato-y. You can't even see any green herbs...come on people, add a bit of Italian Seasoning or basil or oregano or SOMETHING! Stew's calzone was flat and fried. Not really what he was expecting. It was alright, but there was not as much meat in it as the menu description led on.

Lindsey got “Ana's Spinach Ravioli.” By the way, light blue plates like this aren't very appetizing. 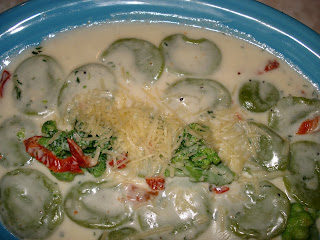 The ravioli was the better of the two dishes, but not as good as Lindsey was expecting. There might have been artichoke in the dish (it said there was), but we couldn't find it.
There's no picture of dessert because it wasn't worth it. It was a chocolate mousse pie (the server recommended because they were out of tiramisu!), probably bought at Albertson's, put on a plate, and stuck in the fridge.
Well this post is getting long, but basically this restaurant left us wanting (not in a good way), and we thought La Dolce Vita was a cheap imitation of Italian food.
Labels: Provo Restaurants Restaurants